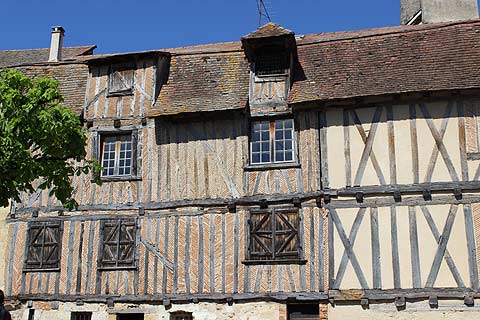 The town is located 92 kilometres to the east of Bordeaux and 40 kilometres south of Perigueux, in the Dordogne department (Aquitaine region).

Bergerac was originally founded around a castle built here in the 11th century (no longer in existence) and the location's strategic importance when it once had the only bridge across the Dordogne River in the region.

The town flourished through the Middle Ages, based largely on wine exporting, although it changed hands between the English and French during the Hundred Years War.

It was the Wars of Religion that were to prove Bergerac's undoing, at least temporarily, because of the continuous persecution of the protestants. The population declined from the end of the 17th century.

By the time of the Revolution the town had a renewed importance in Perigord, although in the following century transport links were to bypass Bergerac and hinder its development to the benefit of neighbour Perigueux.

It was to be the 20th century before industry, tobacco, and the wine trade re-established Bergerac as an important local centre.

The highlight of the town now is the old town, towards the river, which has been carefully restored and is very attractive - there are some very interesting medieval houses and streets to amble around.

Perhaps the finest building is the impressive Recollets Cloister which is part of the Maison du Vin. The cloister is in a building that was previously a monastery and played an important role in the Wars of Religion - the internal balconied cloister is especially attractive.

There is a more modern shopping region and more recent town centre slightly above the old town.